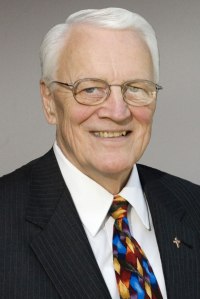 Welcome to the eighth consecutive year of weekly Perspectives articles. I hope they are meaningful to those who read them and welcome your comments and suggestions.

This week I share the news that Rev. Dr. Ralph A. Bohlmann passed away peacefully Sunday evening, July 24, 2016, at the age of 84 years. His memorial service was held yesterday at the Chapel of St. Timothy and St. Titus on the campus of Concordia Seminary in St. Louis. Mine was the humbling honor and pastoral privilege to preach at that service.

Following several years as a parish pastor and professor, Dr. Bohlmann served as the seventh president of Concordia Seminary in St. Louis, from 1975-81, and as president of The Lutheran Church—Missouri Synod from 1981-92. He was named president emeritus of both.

Dr. Bohlmann was found unconscious early last week on the floor of his apartment at Laclede Groves in St. Louis. The cause is unknown but indications are that he was in that condition for a few days before being discovered. He was hospitalized but never regained consciousness.

Terry and I were in St. Louis last week for a reunion of my former staff members and their spouses. On Tuesday we visited and prayed for Ralph in the hospital. His daughter Lynn was there, caring for her dear father. Her brother Paul kept in touch from his home in New York.

The medical prognosis at that time was very bleak. Later that day life support was removed. Medical personnel indicated their belief that Ralph’s life here on earth would be coming to an imminent conclusion, but we all know that no one can predict with certainty exactly when anyone’s life will end. The Lord alone is the one who numbers our days. Ralph continued to breathe independently for five days before joining his wife Pat, who died Sept. 14, 2012.

Our gracious Lord has received Ralph into his everlasting arms, reunited with Pat and many others in “the vast crowd, too great to count, from every nation and tribe and people and language, standing in front of the throne and before the Lamb, clothed in white robes and holding palm branches in their hands” (Rev. 7:9) awaiting all who trust in Christ our Lord for life eternal.

Please join me in prayer that Ralph and Pat’s son Paul and their daughter Lynn, together with the rest of the Bohlmann family, will in the days ahead find peace and comfort in the promise of Christ: “I am the resurrection and the life. Whoever believes in me will live, even though he dies. And whoever lives and believes in me will never die.” John 11:26