The first six vignettes below are from an unknown source. The last four are mine.

By now many of my readers have heard about the passing of a very dear friend, Rev. Robert Charles Greene. Bob had been diagnosed with advanced pancreatic cancer on May 28 and went to heaven July 10, a short 41 days later.

Bob’s obituary is at https://www.ramseyfuneral.com/obituary/pastor-robert-greene. It’s a comprehensive yet concise review of the highlights of his life. Without writing a book, it’s simply not possible to capture adequately 81 years of faith, family, life, love, and leadership.

Jean Greene, Bob’s wife of nearly 57 years, and their children Steve and Diane shared with me a 16 page document titled “Biographical Record and Remembrances of Robert C. Greene.” On those pages Bob shares highlights of his life, family, and career, including vignettes that provide interesting insights into this man’s life, values, and character. Here are a few examples:

As a student at Concordia High School in St. Paul, Minn., Bob worked in the kitchen: “I had a difference of opinion with the President of the College about which of the two people working in the kitchen should become the head person. About this time the President came into the kitchen and told me to go hang up my apron. I was no longer to work there. I was told to come by his office and pick up my check.” Bob wasn’t reticent about expressing his opinions.

In a congregation he served as a young pastor: “There was a real need for Sunday school classrooms, youth room, kitchen, and office. But when the decision went to the Voters it was defeated, primarily under the influence of one family. So I went to a member of that family who had young children and asked him to chair the building committee for a redo of the building vote. When it came up again for a vote, this time it was easily adopted.” Bob knew how to lead.

During my last term of office as President of The Lutheran Church—Missouri Synod I appointed Bob as chair of the Blue Ribbon Task Force on Synod Structure and Governance, aka BRTFSSG. One of his duties was to visit each of the 35 districts of the Synod for a meeting of the Board of Directors or District convention. At one of those meetings way above the Mason-Dixon Line, in the winter, he had no overcoat. I lovingly chided him and presidentially “ordered” him to buy a coat and send me the bill. Not long thereafter I saw him. With a coat. But I never received the bill. Bob knew how to listen. Sometimes with only one ear.

Much more could be said about Rev. Robert C. Greene. Much more will be said at his memorial service this Friday. Suffice it to say here that he was an intelligent, bold, strong-willed, visionary pastor and church leader. More importantly, he was a loving husband and devoted father.

One of Bob’s favorite Scripture readings was Philippians 1:21: “For to me, to live is Christ, and to die is gain.” Amen! Rest in peace, dear friend and brother in Christ!

To commemorate her 79th birthday a few years ago, actress and vocalist Julie Andrews made a special appearance at Manhattan’s Radio City Music Hall for the benefit of the AARP. One of the musical numbers she performed was My Favorite Things from the legendary movie Sound Of Music. Here are the lyrics she used. If you sing it, it’s especially funny!

Botox and nose drops and needles for knitting,
Walkers and handrails and new dental fittings,
Bundles of magazines tied up in strings,
These are a few of my favorite things.

Cadillacs and cataracts, hearing aids and glasses,
Polident and Fixodent and false teeth in glasses,
Pacemakers, golf carts and porches with swings,
These are a few of my favorite things.

When the pipes leak, When the bones creak, When the knees go bad,
I simply remember my favorite things, And then I don’t feel so bad.

Hot tea and crumpets and corn pads for bunions,
No spicy hot food or food cooked with onions,
Bathrobes and heating pads and hot meals they bring,
These are a few of my favorite things.

Back pain, confused brains and no need for sinnin’,
Thin bones and fractures and hair that is thinnin’,
And we won’t mention our short shrunken frames,
When we remember our favorite things.

When the joints ache, When the hips break, When the eyes grow dim,
Then I remember the great life I’ve had, And then I don’t feel so bad.

In the spirit of talking about growing older, here’s Estate Planning Myth #4, as promised several weeks ago: “If I don’t have a will, my family will be able to figure it out.”

Here’s the reality: If you don’t have a will, the probate judge will appoint an administrator. Do you actually think a court-appointed person will carry out your wishes?

In all likelihood, that administrator will not have known you. So how would that person have any clue whatsoever about your wishes on how to distribute the possessions and assets you have worked hard all your life to accumulate?

One of the important decisions you’ll make when preparing your Last Will and Testament is appointing an independent executor. Pick someone younger than you. Pick someone you trust. If you can’t think of anyone, pick Legacy Deo. We’d be happy to help.

Numerous other planned giving topics of significance are addressed in our Planning Your Legacy — A Guide to Planning Your Will and Trust. Contact us at info@legacydeo.org or call (512) 646-4909 or (800) 880-3733 for your free electronic copy. You’ll be glad you did.

Here’s the bottom line: If you don’t already have a Last Will and Testament, git ‘er done! I have a feeling Julie Andrews would approve. God bless your day! 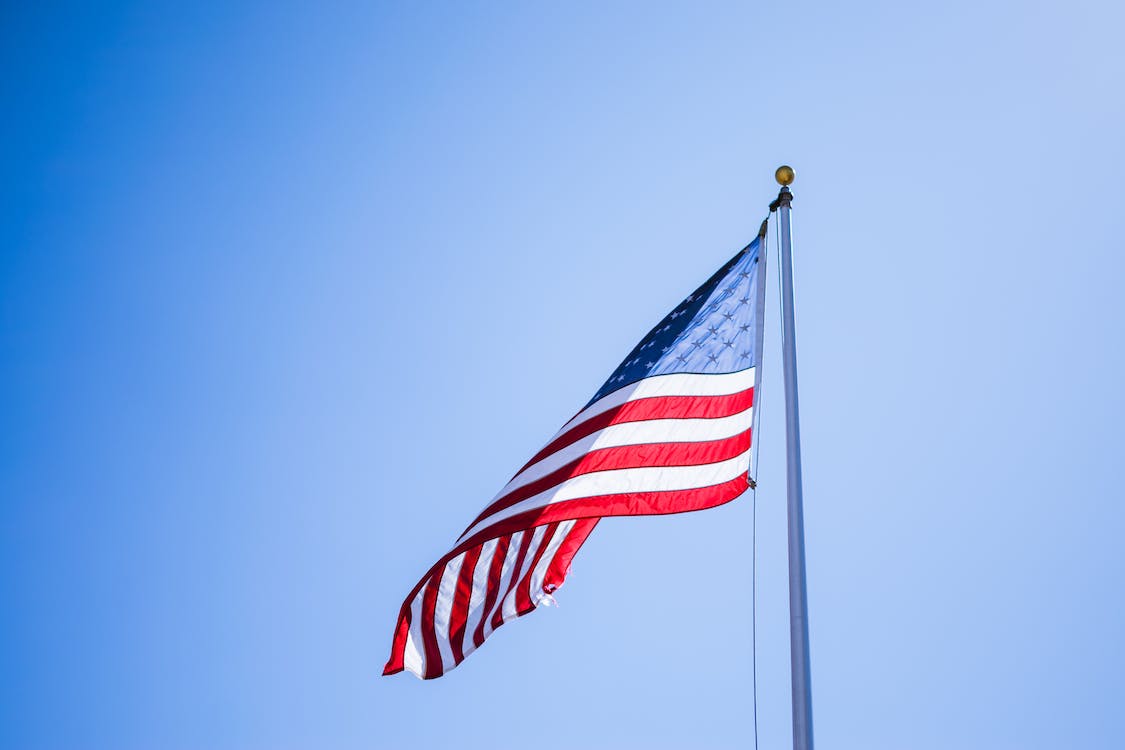 Today’s article is the first of my 11th consecutive year of writing weekly Perspectives. Hard to believe, but very true! Thanks for your interest, thoughtful comments, and sincere appreciation.

Tomorrow is the Fourth of July, a federal holiday commemorating the Declaration of Independence of the United States on July 4, 1776. On that day, the Continental Congress declared that the thirteen American colonies were no longer subject to the monarch of Britain and were now united, free, and independent states.

The Fourth of July is a day to give thanks for the blessings of living in America, “the land of the free and the home of the brave.” Most governmental offices are closed and services curtailed. Many businesses are closed for the day. It’s a day to celebrate the unique freedoms we enjoy.

Last week I saw a news report titled St. Louis Park will no longer say the Pledge of Allegiance at City Council meetings. It appeared in the Jackson Star Tribune. St. Louis Park is a southwestern suburb of Minneapolis. Here’s an excerpt:

The St. Louis Park City Council has decided to drop recital of the Pledge of Allegiance to the flag at its meetings, citing a desire to accommodate the city’s newest and more diverse residents.

“I hope it’s not too controversial,” Council Member Tim Brausen said. “Our community tends to be a very welcoming and increasingly diverse community, and we believe our citizens will understand. I don’t think we’re going to be any less welcoming by not starting our meeting out with the standard ritual.”

Not everyone was happy with this decision. One resident is quoted as saying her grandparents wanted to be American when they immigrated to the United States. She said she didn’t understand how the council could eliminate this part of their history, calling it “obnoxious.”

This St. Louis Park decision brought to mind an article I recently read about a speech given several years ago by Richard D. Lamm, a Democrat who served as governor of Colorado for twelve years (1975-1987). Lamm told Snopes: “Yes, it is a speech I gave a year and a half ago in Washington D.C. It was a 5 minute speech, and I am amazed and gratified it has received so much coverage.” Here are a few excerpts from a revised version of his speech:

I have a secret plan to destroy America. If you believe, as many do, that America is too smug, too white, too self-satisfied, too rich, let’s destroy America. It is not that hard to do. History shows that nations are more fragile than their citizens think. No nation in history has survived the ravages of time. Arnold Toynbee observed that all great civilizations rise and they all fall, and that “an autopsy of history would show that all great nations commit suicide.” Here is my plan:

For the full text of Lamm’s speech go to: https://www.snopes.com/fact-check/richard-lamm-on-multiculturalism/.

Knowing the controversial nature of this topic and realizing many Americans, including some of my closest friends and numerous readers, would see Lamm’s speech as radical, myopic, short-sighted, discriminatory, and even unpatriotic, I was reticent about addressing it.

Yet my sense is that although many traditions of German and Wendish origin were observed after our forefathers and foremothers settled in America, our genealogical and spiritual patriarchs and matriarchs accepted American principles and values and chose to support and become part of the country that, for the most part, welcomed them with open arms.

If any organization or country is to survive, there must be an overwhelming sense of unity of purpose and values, while allowing reasonable diversity among its members and citizens.

Much more could be said on this topic, including the role of the church and its constituents in promoting and participating in responsible resettlement efforts. Lutheran Immigration and Refugee Service is one such organization. Many individuals and congregations are also involved.

Remember the words of Jesus in Matt. 25:35: “I was a stranger and you took me in.” I’d surely like to believe we can do that without destroying America!