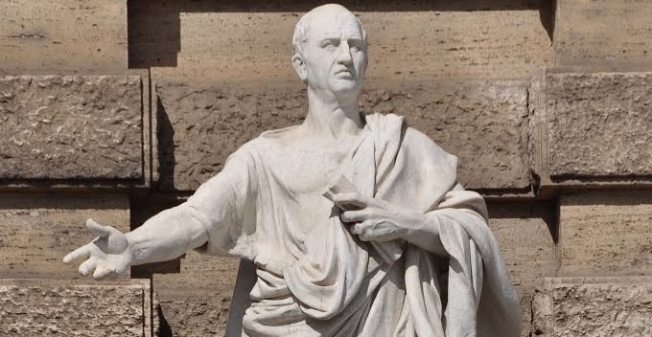 Today’s quote is from a first century BC philosopher and politician:

“A nation can survive its fools, and even the ambitious. But it cannot survive treason from within. An enemy at the gates is less formidable, for s/he is known and carries his/her banner openly. But the traitor moves amongst those within the gate freely, his/her sly whispers rustling through all the alleys, heard in the very halls of government itself. For the traitor appears not a traitor; s/he speaks in accents familiar to his/her victims, and s/he wears their face and their arguments, s/he appeals to the baseness that lies deep in the hearts of all men (and women). S/He rots the soul of a nation, s/he works secretly and unknown in the night to undermine the pillars of the city, s/he infects the body politic so that it can no longer resist. A murderer is less to fear.”

Here are a few comments about Cicero’s life from the Internet Encyclopedia of Philosophy:

Marcus Tullius Cicero was born January 3, 106 BC and was murdered December 7, 43 BC. His life coincided with the decline and fall of the Roman Republic and he was an important actor in many of the significant political events of his time. His writings are now a valuable source of information to us about those events.

He was, among other things, an orator, lawyer, politician, and philosopher. Making sense of his writings and understanding his philosophy requires us to keep that in mind.

While Cicero is currently not considered an exceptional thinker, largely on the (incorrect) grounds that his philosophy is derivative and unoriginal, in previous centuries he was considered one of the great philosophers of the ancient era and was widely read well into the 19th century.

Probably the most notable example of his influence is St. Augustine’s claim that it was Cicero’s Hortensius (an exhortation to philosophy, the text of which is unfortunately lost) that turned him away from his sinful life and toward philosophy and ultimately to God.

Cicero’s warning 2,000 years ago: “A nation can survive its fools, and even the ambitious. But it cannot survive treason from within.” Could that be true in both the world and the church today?