God willing, this Sunday will be Terry’s and my 51st wedding anniversary. I thank God for this wonderful woman whom I dearly love! She has been and continues to be a huge blessing to me, our children, our grandchildren and lots of people, many of whom she has never even met!

We were married on my 23rd birthday. Remembering our anniversary is not a problem. Agreeing on which event we should celebrate on January 29 is a challenge. I say anniversary. Terry says birthday. Although both a bit strong-willed, we usually come up with a workable solution!

Both of us are also chronologically mature enough to recall words and phrases used in our childhood but mostly absent from the vocabulary of our children and grandchildren. Here are some that came to my attention not long ago:

There are more of these lost words and expressions than Carter has little liver pills! Those of us past the midpoint of the chronological arc remember at least some of these words and phrases that once strutted their hour upon the earthly stage and now are heard no more, except in our collective memory. It’s one of the profound realities of aging experienced by every generation.

We were in like Flynn and living the life of Riley, and even a regular guy couldn’t accuse us of being a knucklehead, a nincompoop or a pill. Not for all the tea in China! Gone are the days of beehives, pageboys, spats, knickers, fedoras, poodle skirts, saddle shoes, and pedal pushers.  Shucks, I don’t even remember some of those things.

Well, I hope you’re Hunky Dory after you read this article. See ya’ later, alligator! After while, crocodile! God bless your day!

Tomorrow, January 20, is Inauguration Day in America. Donald John Trump will be sworn in as the 45th President of the United States of America. However, some may question that number.

Actually, Grover Cleveland is counted as both the 22nd and 24th President. He was elected, then lost, then won again four years later. The factual way to count U.S. Presidents is to say Donald Trump will be the 45th President but only the 44th person ever to take the oath of office.

Nearly one million people are estimated to be in Washington D.C. to witness the event in person. Tens of millions will view the ceremony across the country and around the world.

Interestingly, crowd size estimators use aerial images from satellites, helicopters and balloons, plus basic math. Three pieces of information are needed: the total area of the space, the proportion of the area that is occupied, and the density of the crowd. But I digress.

More important than the number of people who witness the inauguration, whether in person or via electronic media, is the meaning of the event. In many countries around the world, leadership transitions are less than peaceful. Historically, nations of the world have experienced change in leadership following a decisive battle, a horrific insurrection, or a regal beheading.

Not so in America. Notwithstanding protests from individuals and groups regarding the legitimacy of this presidential election, the fact remains that tomorrow we will witness the non-universal phenomenon of a mostly peaceful transition of presidential power.

Of course we’ve been told to expect demonstrators. That’s nothing new. We’ve also seen news reports predicting thousands of motorcyclists known as “Bikers for Trump” who are expected to provide unofficial security at the event. That’s not quite as common.

Tomorrow will come. Tomorrow will go. Your life and mine might not be discernibly different, at least for now. But like it or not, change will occur. Some change will be good, some not. It’s not a simple task to lead what is arguably the most powerful country in the world.

Regardless of whether our new president views prayer the way most Christians do, the best suggestion I can offer today is that we hold our new leader and our country in our prayers. Here’s one suggestion from Lutheran Service Book’s Prayer for Responsible Citizenship:

“Lord, keep this nation under your care. Bless the leaders of our land that we may be a people at peace among ourselves and a blessing to the other nations of the earth. Grant that we may choose trustworthy leaders, contribute to wise decisions for the general welfare, and serve you faithfully in our generation; through Jesus Christ, our Lord. Amen.” 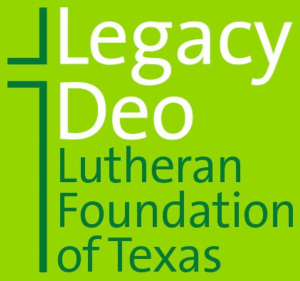 Legacy is a word that means bequest, inheritance, heritage. Deo is the Latin word for God. Those two words comprise the new name of Lutheran Foundation of Texas: Legacy Deo.

Our legacy from God is who we are and everything we have, including possessions, wealth, fullness of life, faith, forgiveness, and eternal salvation. Our legacy to God and to our loved ones is thanking God for his gifts by using them wisely, during, at the end of, and beyond our lifetime. Helping people in that process is the ministry of Legacy Deo.

Here are portions of a recent public letter from Larry Ohls, Chief Executive Officer of Lutheran Foundation of Texas for the past seven years:

The year 2017 will be a very special NEW year for this organization. It will be the beginning of a new era for this foundation that was chartered over 56 years ago.

Over the last 15 months our organization has evaluated the brand identity of this ministry. We spent a great deal of time considering and discussing our core values, mission, purpose, and vision for the future. After extensive research, examination, and prayer the decision was made to change the Foundation’s name to Legacy Deo.

Our new name reflects the essence of what we do as an organization: to assist Christians in leaving a legacy that honors God and builds His kingdom. Over the past 56 years, this Foundation has worked to inspire giving that impacts life forever. Going forward, it is our vision that God’s people, each and every one, will leave a legacy for faith and family like so many before them.

I also want to inform you that effective December 31, 2016, I am retiring as Chief Executive Officer. I plan to continue as an advisor with Legacy Deo and assist in any manner that adds value to the organization. The Board of Directors has selected Rev. Dr. Gerald Kieschnick, President Emeritus of the LCMS, to lead this ministry as Chief Executive Officer. We are blessed by God to have a man of Rev. Kieschnick’s talent, experience and commitment to guide us into the future.

It has been an honor to direct this organization over the past seven years. I consider it a blessing to have served alongside a talented staff that is dedicated to influencing the lives of Christian donors and the life-enriching ministries they support. To God be the glory!

Larry has been a great leader of this organization for the past seven years. I’ve known him all his life and pray his retirement will be a blessing for his wife Carolyn and their family.

It is my privilege to accept the leadership role of this very important ministry. With God’s help and Terry’s blessing, I look forward to helping individuals and families create a legacy for their loved ones, their congregations, and other charitable organizations with the gifts God has entrusted to their care.

For information and assistance on how to begin that process for your family and your favorite faith-based endeavors, see the contact information below.