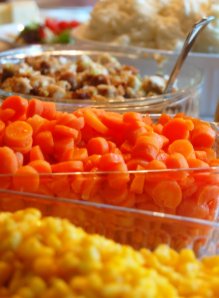 Looking into the eyes of one horse will disclose that he is blind.  His owner has chosen not to have him put down, but has made a good home for him. This alone is amazing.

If you stand nearby and listen, you will hear the sound of a bell. Looking around for the source of the sound, you will see that it comes from the smaller horse in the field. Attached to that horse’s halter is a small bell. It lets the blind friend know where the other horse is, so he can follow.

As you stand and watch these two friends, you’ll see that the horse with the bell is always checking on the blind horse and that the blind horse will listen for the bell and then slowly walk to where the other horse is, trusting that he will not be led astray.

When the horse with the bell returns to the shelter of the barn each evening, it stops occasionally and looks back, making sure that the blind friend isn’t too far behind to hear the bell.

Like the owner of these two horses, God does not throw us away just because we aren’t perfect or because we have problems or challenges. He watches over us and even brings others into our lives to help us when we’re in need.

Sometimes we’re the blind horse, being guided by the little ringing bell of those whom God places in our lives. Other times we’re the guide horse, helping others to find their way.

Good friends are like that. You may not always see them, but you know they’re always there.

This Thanksgiving Day I thank God for his love and forgiveness in Christ, for every member of my family and for the many good friends with whom I have been blessed! Perhaps you’ll take a few moments to do the same.

Both in America and across the globe we continue to experience tragedy and trauma produced by natural disaster. Typhoon Haiyan in the Philippines, floods in Texas and tornados in Illinois and Michigan have drawn our recent attention to the vulnerability of humankind to unimaginably powerful forces of nature.

In the news reports we often see photos of areas of devastation that once were cities or towns and survivors who are also victims searching through piles and pieces of what were once their homes. Even more sadly, emotionally gripping photos portray the trauma of serious injury or the grief of a parent whose young child was taken from their arms by flood waters or tornado winds.

Several months ago I received a note from Chris Wicher of the LCMS Eastern District, a district president friend of mine who had heard a story that some would dismiss as coincidence but, for people of faith, displays God’s activity in our lives. Here’s the story:

The car stopped and one of the pastors asked if they needed help. The people responded: “No, not really. We don’t know where to begin and besides the house does not yet have electricity restored.”

The would-be helpers told them who they were and that they were simply driving around to see if they could be of help. “Besides,” they said, “we have a generator and pump and mops and buckets and Clorox.”

Quite moved by their generous offer, the homeowners took them up on their offer and in a few hours the cleanup was completed. If kindness and generosity were not enough, here’s the thing.

Not five minutes before the carload of generous helpers offered their assistance, the couple prayed to the Lord for direction and help! God heard their prayer by sending some very good hearted men. The love of Jesus moves us to acts of kindness. God be praised!

Several years ago radio commentator Paul Harvey spoke this Warning for a Nation:

If I were the devil, I wouldn’t be happy until I had seized the ripest apple on the tree: thee. So I’d set about however necessary to take over the United States. I’d subvert the churches first. I’d begin with a campaign of whispers. And with the wisdom of a serpent, I’d whisper to you as I whispered to Eve: “Do as you please.”

To the young I would whisper that the Bible is a myth. I would convince them that man created God instead of the other way around. I would confide that what’s bad is good and what’s good is square. And the old I would teach to pray, after me: “Our Father, which art in Washington …”

And then I’d get organized. I’d educate authors in how to make lurid literature exciting so that anything else would appear dull and uninteresting. I’d threaten TV with dirtier movies and vice versa. I’d pedal narcotics to whom I could. I’d sell alcohol to ladies and gentlemen of distinction. I’d tranquilize the rest with pills.

If I were the devil I would encourage schools to refine young intellects, but neglect to discipline emotions. Just let those run wild, until before you knew it, you’d have to have drug-sniffing dogs and metal detectors at every schoolhouse door.

Within a decade, I’d have prisons overflowing. I’d have judges promoting pornography. Soon I could evict God from the courthouse, then from the schoolhouse, and then from the houses of Congress. And in His own churches I would substitute psychology for religion and deify science. I would lure priests and pastors into misusing boys and girls and church money.

I would caution against extremes, and hard work, and patriotism, and moral conduct. I would convince the young that marriage is old-fashioned, that swinging is more fun, that what you see on TV is the way to be. And thus I could undress you in public, and I could lure you into bed, with diseases for which there is no cure.

In other words, if I were the devil, I’d just keep right on doing what he’s doing!

Dr. Gerald B. (Jerry) Kieschnick
One Lord, One Faith, One Baptism – Eph. 4:5
For previous issues of Perspectives go to www.jerrykieschnick.wordpress.com

Here’s a little story that caught my attention recently and, frankly, struck my fancy fairly sharply! It’s about giant concrete arrows that point the way across America:

What are these giant arrows? Some kind of surveying mark? Landing beacons for flying saucers? Earth’s turn signals? No, it’s… The Transcontinental Air Mail Route.

On August 20, 1920, the United States opened its first coast-to-coast airmail delivery route, just 60 years after the Pony Express closed up shop. There were no good aviation charts in those days, so pilots had to eyeball their way across the country using landmarks. This meant that flying in bad weather was difficult, and night flying was just about impossible.

The Postal Service solved the problem with the world’s first ground-based civilian navigation system—a series of lit beacons that would extend from New York to San Francisco. Every ten miles, pilots would pass a bright yellow concrete arrow. Each arrow would be surmounted by a 51-foot steel tower and lit by a million-candlepower rotating beacon. A generator shed at the tail of each arrow powered the beacon. Now mail could get from the Atlantic to the Pacific not in a matter of weeks, but in just 30 hours or so.

Even the dumbest of air mail pilots, it seems, could follow a series of bright yellow arrows straight out of a Tex Avery cartoon. By 1924, just a year after Congress funded it, the line of giant concrete markers stretched from Rock Springs, Wyoming, to Cleveland, Ohio. The next summer, it reached all the way to New York, and by 1929 it spanned the continent uninterrupted, the envy of postal systems worldwide.

Radio and radar are, of course, infinitely less cool than a concrete Yellow Brick Road from sea to shining sea, but I think we all know how this story ends. New advances in communication and navigation technology made the big arrows obsolete, and the Commerce Department decommissioned the beacons in the 1940s. The steel towers were torn down and went to the war effort.

But the hundreds of arrows remain. Their yellow paint is gone, their concrete cracks a little more with every winter frost, and no one crosses their path much, except for coyotes and tumbleweeds.

But they’re still out there. Check it out at http://www.snopes.com/travel/airline/arrows.asp.

Next year we’re hosting a “Highlights of Paul’s Journeys” cruise that will take us to places with history dating back to the first century AD. Those places also are great reminders of the power of permanence. For more information about this trip, go to www.eo.travel/Highlights14.aspx.

Some of the places we’ll visit have structures crumbled in ruins. Others have withstood the stress of wars and weather. Like giant concrete arrows, they’re still out there, reminders in many cases of the forerunners of the Christian faith, people who devoted and even gave their lives to the cause of Christ, people like St. Paul and other apostles, pointing the way to heaven.

Now it’s our turn to point the way!